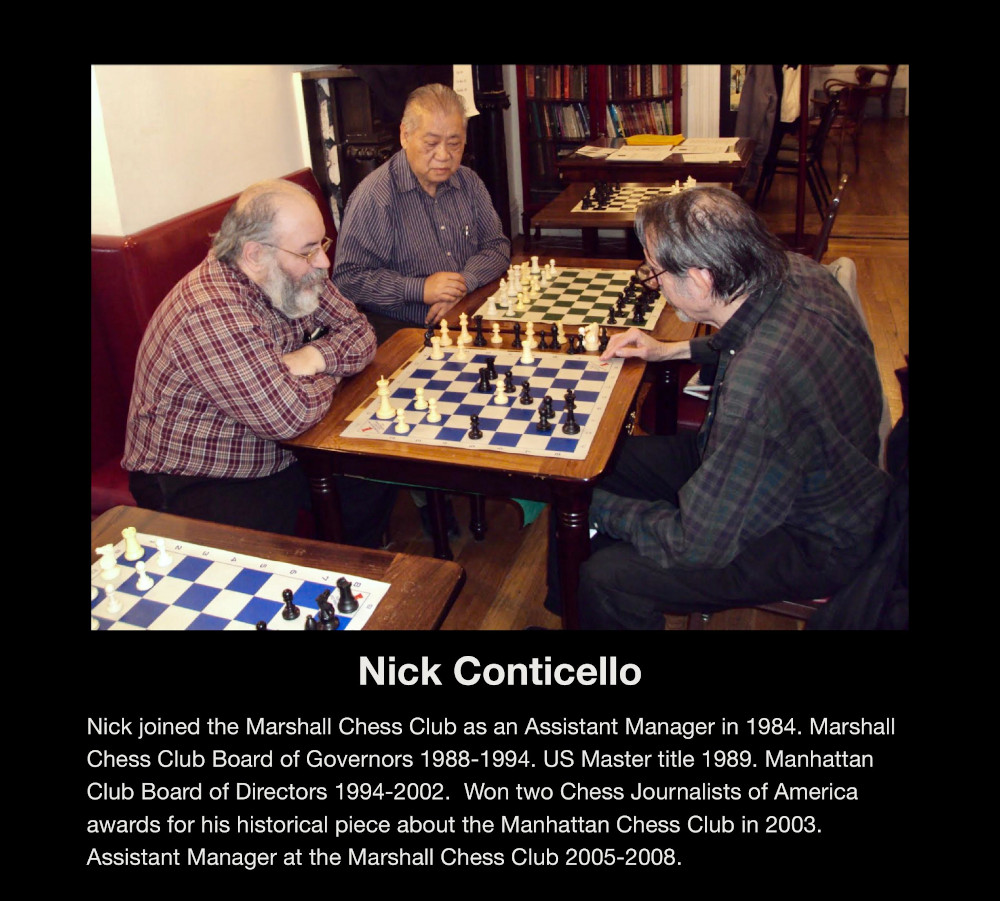 I first knew Nick in the 1970s. We played a few tournament games. I've played in countless tournaments that he directed at the Marshall and Manhattan clubs as well as the Bruce Bowyer Memorial. We worked together as managers at the Manhattan Club's final location in the New Yorker Hotel. We were also roommates, living in Ridgewood, Queens for 9 years.

Nick loved old movies, especially the Three Stooges. He did a pretty good Curly shuffle. He loved baseball and old TV shows. He was a talented magician.

After we went our separate ways in 2013 we stayed in touch by email. We would play the post word game and he beat me everytime. One draw and 2,000 losses. We would talk Mets. I last saw him in 2018 at a Goichberg tournament. He seemed to be doing well.

RIP Nick. You're in a better place.

The late Nick Conticello was a well-known chess player, director, organizer, historian and author. He was also an avid practitioner of the art of magic and an accomplished checkers player.

An expert on films, Nick hosted “Movie Night” program at the Marshall Chess Club. We often quoted lines from classic horror movies to each other. Nick loved slapstick, which led to him being called “laughing boy” when he was young.

I’d like to share with everyone some of my more personal memories of Nick. I knew Nick for many years while he was manager of both the Marshall and the Manhattan Chess Clubs. We spent many hours going over my games and analyzing the openings. Nick had some rare chess knowledge. He would enjoy showing the analysis of the famous endgame rook plus rook pawn vs. bishop. I would say only Benko knew it better.

As a player, Nick’s career proceeded slowly. Although extremely intelligent and possessed of a great memory, he seemed to lack confidence. He played in many obscure venues like Temple Isaiah and Hyland House in Staten Island. I tried to encourage him, and Nick eventually achieved a master rating. In the early 2000’s Nick finally ventured to a few major tournaments and had some success at Foxwoods and the World Open.

As a director, he had a stern hand. When one obnoxious player threw his entry fee check through the office window at the Manhattan Chess Club at Carnegie Hall, loudly announcing his arrival, Nick threw the check back and replied, “Out! Out!”. When a well-known sandbagger of IM strength came to the Manhattan at Restaurant Row, Nick said, “If you want to play here, your rating is 2400”. The guy left and immediately joined the Marshall!

We often went to a late dinner after the club closed. Nick would never eat anything green! I did him the favor of eating his salads and vegetables. His diet showed on his waistline.

Nick was sharp-witted and full of humorous stories, but sometimes his quick temper cost him. I remember one terrible incident when some punks grabbed Nick’s hat on the subway platform. He ran after them and got such a bad beating that he was hospitalized. I faced several such situations on the mean streets of New York but swallowed my pride and walked away unscathed. Only Bruce Lee could fight a group of assailants and emerge victorious!

For years Nick roomed with chess players. First with IM Bonin, and later with IM Naranja. So long as he had a chess player near him, Nick remained fairly stable. But when he had to seek other lodging on his own, Nick seemed to deteriorate. He has stopped coming to the Marshall for a few years, and then one day came the tragic news. Nick was missing! He was found riding the subways. I had the most horrible feeling of déjà vu. Our friend and colleague GM William Lombardy had suffered the same fate. “Whom the Gods would destroy they first make mad”.